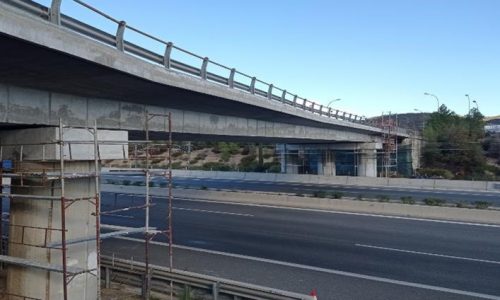 A demanding simultaneous jacking and lifting of a bridge erected in mid ’90 has been performed by HiSCS for rehabilitation purposes, among them the replacement of the existing bearings.

The superstructure is an overpass crossing a major highway in Greece connecting the cities of Athens and Korinthos, with prestressed concrete voided slab. The bridge consists of 3 spans with total length 77m (21m+41m+15m), skew angle of 77⁰ and a deck width 11.5m, accommodating two traffic lanes. At both abutments superstructure cantilevers are projected increasing the deck width by 2.5m and 7.5m respectively at both abutments.

The initial design specified elastomeric non-anchored bearing with dimensions 900x900x125mm – 3 pcs in each pier and 600x700x110mm – 2 and 3 pieces in each abutment, while the new design foresees their replacement with new bearings type C (EN-1337-3) with dimensions 350x350x166mm at abutments and 600x700x135mm at piers, anchored with external checkered plates.

The type of superstructure (prestressed) in conjunction with the increased height of new bearings following the new anti-seismic demands, defined the need for a simultaneous jacking & lifting allowing a max differential elevation lifting of 20mm per pier/abutment.

Prior of lifting all elements obstructing the lifting were disassembled or removed (steel guard rails, expansion joints, abutments sidewalls embedded with the deck, public networks etc.). The existing clearance (gap between the lower part of superstructure and the upper part of pier cap), has been recorded to the order of 100mm, defining the size of the jacks and consequently their stroke capacity, i.e., max 20mm.

The whole process took about 3,5 weeks and the superstructure resettled at an elevation of about +60 mm from its initial recorded considering the thicker new bearings, the need of the construction of new bearing plinths as well as the significant lack of horizontality and levelling of contact surfaces in superstructure.

The lifting team had to deal with the fact that the progressed cantilever in abutment lead to an inclined differential lifting by about 4mm due to extra cantilever weight by adjusting the pressure/force in the jacking system for a uniform lifting. Additionally, the new design requested the orientation of the new bearings to follow the longitudinal axis of superstructure and not the axis of the pier caps. That was another problem for the lifting team trying to relocate the new bearings inside the found recess formed by the embedded to the superstructure of the old bearings due to construction errors.

High strength cementitious mortars have been used for the erection of the new plinths as well as high strength epoxy resins were applied on upper and lower external checkered plates of the new bearings for bonding and friction purposes.

The use of bearings anchored with external checkered plates is a common practice  in cases of replacement of old non-mechanically anchored bearings, since the clearance between the superstructure and pier caps/abutments is limited not allowing any installation of anchoring bars/dowels system (old designs without contractual requirement for bearings replacement).

No comments to show.

We're not around right now. But you can send us an email and we'll get back to you, asap.

We use cookies on our website to give you the most relevant experience by remembering your preferences and repeat visits. By clicking “Accept All”, you consent to the use of ALL the cookies. However, you may visit "Cookie Settings" to provide a controlled consent.
Cookie SettingsAccept All
Manage consent

This website uses cookies to improve your experience while you navigate through the website. Out of these, the cookies that are categorized as necessary are stored on your browser as they are essential for the working of basic functionalities of the website. We also use third-party cookies that help us analyze and understand how you use this website. These cookies will be stored in your browser only with your consent. You also have the option to opt-out of these cookies. But opting out of some of these cookies may affect your browsing experience.
Necessary Always Enabled
Necessary cookies are absolutely essential for the website to function properly. These cookies ensure basic functionalities and security features of the website, anonymously.
Functional
Functional cookies help to perform certain functionalities like sharing the content of the website on social media platforms, collect feedbacks, and other third-party features.
Performance
Performance cookies are used to understand and analyze the key performance indexes of the website which helps in delivering a better user experience for the visitors.
Analytics
Analytical cookies are used to understand how visitors interact with the website. These cookies help provide information on metrics the number of visitors, bounce rate, traffic source, etc.
Advertisement
Advertisement cookies are used to provide visitors with relevant ads and marketing campaigns. These cookies track visitors across websites and collect information to provide customized ads.
Others
Other uncategorized cookies are those that are being analyzed and have not been classified into a category as yet.
SAVE & ACCEPT